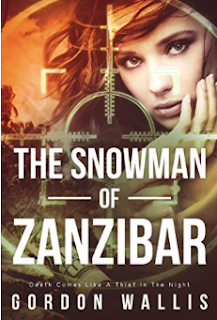 This is Book 1 of a series of 3 from the very talented Gordon Wallis - buy it - read it. In fact buy the boxed set - Books 1-3. The most gripping books I have read in a long time.

"Ex soldier Jason Green was depressed and had been drinking far too much. The endless London winter had been bitterly cold. The freelance insurance fraud work was mundane, but this changes early on a frozen February morning.
The wealthy client was desperate.Just how was his high flying young son making so much money?It sounded like a dream assignment. An escape from the city and a bit of travel.And for a while it was.But on an idyllic island utopia, someone is watching, and a dangerous criminal cartel operates quietly in the shadows.As Green digs deeper he uncovers the truth, but a series of unfortunate events occur. Events far beyond his control. Events that result in unspeakable violence and horror. The cartel must be stopped, but who will be the next to die?The action builds to a frenzy in this gripping 1st in series page turner and the profoundly shocking finale will stay in your mind for a long time. A very, very long time..."